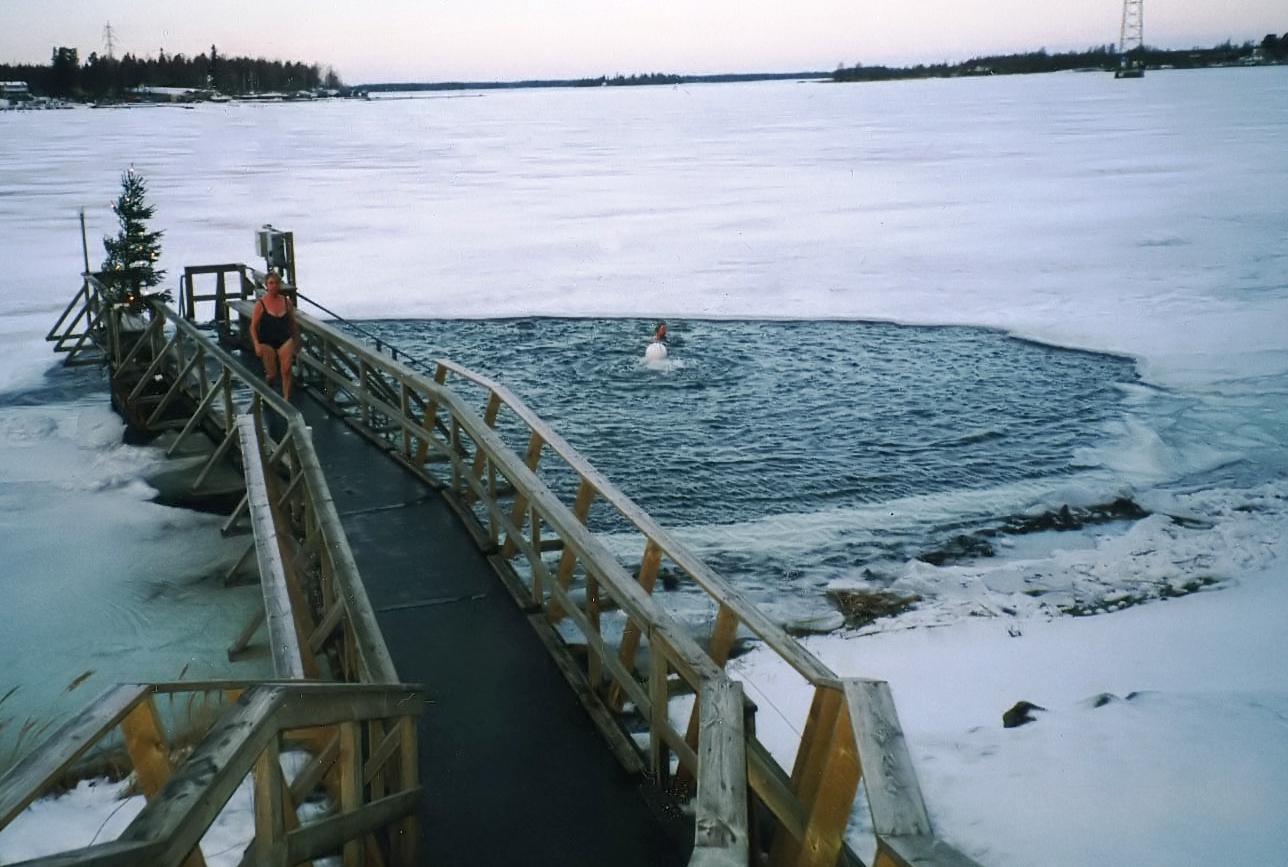 Winter swimming – swimming during the winter season, often outdoors  in open water  or even ice swimming, when the water is frozen and you have to break it to get in – may be an activity that attracts you.

Eastern Europe and Russia celebrate the Eastern Orthodox Epiphany (some on the 6th and some on 19th January) with winter swimming and some areas hold competitions or raise money for charity with well-publicized events. Polar Bear Plunges are often held to celebrate New Year’s Day, sometimes for charity, although many participants do not swim at these events. While some swimmers use thermal protection or wetsuits, many winter swimmers wear standard swimming costumes.

In Finland, Northern Russia, Norway, Sweden, Denmark, Estonia, Lithuania and Latvia ice swimming is used as a way to cool off rapidly after staying in a sauna or as stress relief.  Helsinki and Tampere (Finland) have several places for ice swimming  and winter saunas.

In Europe, there are Winter swimming clubs in Belgium (Bruges, Boom, Deurne Dendermonde, Huy, Theux and Wachtebeek) and Germany (Wohrsee lake in Burghausen).

China has many winter swimming organisations. In Beijing, there are winter swimming places such as Shichahai, Yu Yuantan and Xihu. In Harbin, northern China, many ice swim in the Songhua River. In Dalian, a coastal city in northeast China, hundreds of people swim in the sea in winter (Fujiazhuang beach, Xinghai Square beach, Shicao beach and Bangchuidao Island beach).

If you are not used to swimming in very cold water – winter swimming can be dangerous.

If you are healthy, winter swimming isn’t dangerous but children and the elderly should avoid it.  If you are obese or have heart trouble including arrhythmia, or a respiratory disease, or high blood pressure, you should also avoid it. Experienced winter swimmers have a greater resistance to effects of the cold shock response.

Hypothermia is not quite as big a risk as might be expected. According to Tucker and Dugas, it takes more than approximately 30 minutes even in 0 °C water until the body temperature drops low enough for hypothermia to occur. Many people would probably be able to survive for almost an hour. There is no consensus on these figures however; according to different estimates a person can survive for 45 minutes in 0.3 °C water, but exhaustion or unconsciousness is expected to occur within 15 minutes. Consuming alcohol before winter swimming should be avoided because it speeds the onset and progression of hypothermia.

But just because water is liquid, DOES NOT MEAN it is at or near 0 °C. Chlorine added to water in swimming pools and salt in seawater allow the water to remain liquid at sub-zero temperatures. Swimming in such water is significantly more challenging and dangerous.

Although there are risks associated with the practice, scientific studies also provide some evidence for the following health benefits.